UPDATE 13.10.2016: HP finally surrendered after massive complaints of customers and released official firmware updates disabling the blocking mechanism for older and non-genuine cartridges. For more information and link to official firmware fix click here. Direct link to official 8610 firmware is here. The following article is kept for reference as it was the only way how to solve the issue with non-working OfficeJet printers for about one month after the blocking mechanism previously built to HP firmwares was triggered by the right date. 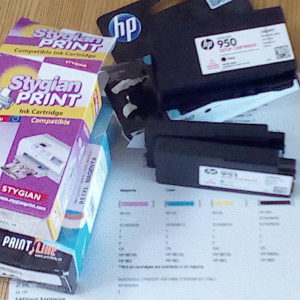 Printer manufacturers really want you to buy their genuine, overprices ink cartridges and toners. Even though US Magnuson-Moss Warranty Act and European rules on fair competition make it clear that printer manufacturers must not block using non-original inks and toners, and even warranty must not be void just by the mere fact of using non-original material, It’s becoming increasingly difficult to use alternative print material. For HP OfficeJet Pro 8610, some automatic firmware upgrade caused that many older and non-original or refilled cartridges stopped working, being marked as damaged. Some Brazilian folks posted a video on Youtube with a guide how to downgrade the firmware, and most important, published a link with the particular firmware version that makes the printer recognize the cartridges as valid! This is an English version of the manual how to do it:

Other articles on this topic:

Edit 14.9.2016: The link posted to uloz.to disappeared, HP or somebody forced removing it. Now the link was updated to the original Portugese link on mediafire. You can also try this mega.nz link: https://mega.nz/#!SB12HLhB and when asked, use this decryption key: !bZmGbp7pM6Qc6-cSzfLAkUdvob7jT5Vsh7sHQxU7NBs

If this manual helped you and worked (and perhaps saved you some money), there is a tiny Paypal donate button which you can use as a way to say thanks :)